After the second album by HOUSE OF LORDS featured here, some of you asked for the band’s awesome self-titled debut, also remastered by Axe Killer Records (now re-branded Bad Reputation).
Essential into any ’80s Melodic Hard Rock / AOR collection, this reissue of “House Of Lords” includes a bonus track, a different, remixed version of the song ‘Love Don’t Lie’, written by the great Stan Bush.

Formed from the ashes of Giuffria, featuring keyboardist Gregg Giuffria, House Of Lords signed a deal with Kiss bassist Gene Simmons’ own label (and distributed by RCA Records) for two albums.
Nobody was calling them a “supergroup”, but most of the members had been around the block more than once, as example vocalist James Christian who worked for many as background singer and songwriter.

Rick Nielsen of Cheap Trick (with whom the band would later tour) co-wrote the song “Slip of the Tongue”. Many other popular hard rock musicians has contributed to the songwriting of the songs on the album, including Stan Bush, David Glen Eisley of Giuffria, Johnny Warman and Mandy Meyer of Asia.
As plus, Jeff Scott Soto can be found on backing vocals throughout the whole album. Previously Soto sung with Christian in a project called L.A. Rocks, hence the connection.

Lanny Cordola played guitar on the prior Giuffria LP, and continued on to House Of Lords. Bassist Chuck Wright had a stint in Quiet Riot. Drummer Ken Mary kept time during Alice Cooper’s metal phase.
All they needed was a singer, and they found a great one in James Christian, who today is the sole remaining original member of House Of Lords. They signed to Gene Simmons’ imprint, and got legendary producer Andy Johns behind the mixing desk.
All the ingredients were in place.

The keyboard heavy opening on “Pleasure Palace” shows that the Giuffria-the band spirit will be present, and this is a glossy ’80s production. James Christian comes across as a full-lunged, well rounded singer. He’s able to sing with a little of blue eyed soul, and he’s capable of the screams too. The feature that actually sets the song apart is the keyboards, very gothic and European sounding, but not wimpy.

“I Wanna Be Loved” was the first single / video, an easy choice being midtempo with a shout-along chorus. It’s a killer song, one among the buch of killer this album packs. Heaps of backing vocals thicken up the mix, and Lanny Cordola plays a tasteful albeit standard guitar solo on top.
“Edge of Your Life” serves as a keyboard power-ballad, and a dramatic one at that. The musicianship is stellar and the arrangement is expert, but the standout performer is James Christian.

Since you need a bar room blaster for the dudes, “Lookin’ For Strange” fits the bill. Instruments aflame, and with obvious inspiration from the Van Halen shuffle of old, “Lookin’ For Strange” is nonetheless a ton ‘o fun. E
Then there’s “Love Don’t Lie”, one of the greatest power ballads of all time, penned by Stan Bush. An this reissue the bonus track is the remix version of the song, edited down and remixed by David Thoener for a single release. This mix was used for the music video as well, and it’s quite different

Rock and roll resumes with “Slip of the Tongue”, a title that David Coverdale would use a year later. High octane, full speed ahead, this is House of Lords doing the shred. The musicianship speaks for itself and you can hear clear Whitesnake and Thin Lizzy influences.
The fast pace sets up “Hearts of the World” very well via contrast. From here, the album becomes more progressive, dramatic, and bombastic.

“Hearts of the World” is AOR perfection, choppy with caverns of keyboards and waterfalls of gang vocals. I love it. This is a perfect example of why I love this musical genre so much.
“Under Blue Skies” follow this with bagpipes and majestic keyboard horns. It’s another dramatic, melodic winner with progressive qualities. The outro has those “na na na na na” vocals that all but guarantee you’ll be singing along.
“Call My Name” makes it three in a row, though it changes the forecast to sunny. Bright and positive, “Call My Name” is still a big sounding song, with the gang vocals and guitar shreddery that you’ve come to expect. 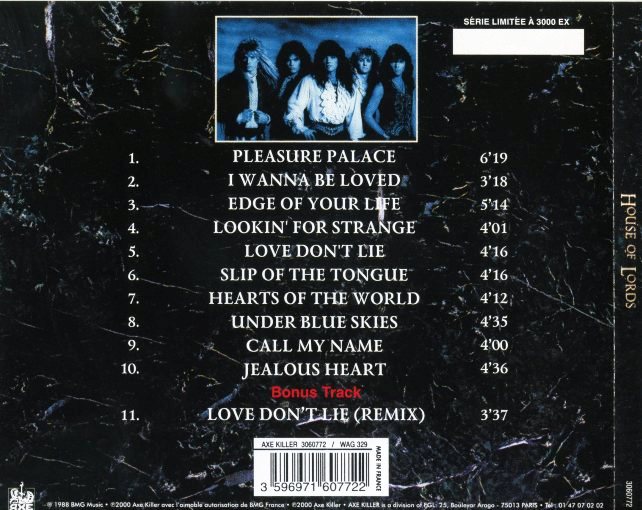 Cordola gets the chance to show a lil’ bit (a minute) of classical guitar chops as an intro to “Jealous Heart”, the last of 10 tracks. This is a monnster midtempo AOR / MHR tune that I always found similar to some Journey. It doesn’t matter, it’s a fantastic song on its own.

“House Of Lords” is close to Melodic Hard Rock / AOR perfection. It’s bombastic, catchy, big, but also meaty, elaborated. It’s a pillar in the ’80s works for the genre, and a must have.
This Axe Killer remaster – not easy to find – is fabulous, done several years ago in the ‘old school’ way but darn, it’s terrific. The difference with the other CD versions is simply abysmal.
MANDATORY