These were requested here, the two NIGHT albums remastered in Japan by specialized label Air Mail Archive, in a mini-LP fashion with cardboard sleeve faithfully replicating the original US LP artwork, both including a bonus track.
The self-titled “Night” is the debut album by this combo featuring talented vocalists Chris Thompson and Stevie Vann (Lange), at the time, wife of uber-producer Mutt Lange.

NIGHT came together combining the skills of several already well established musicians and session pros of impeccable pedigree.
Female vocalist Stevie Lange (AKA Stevie Vann) had worked with the likes of Graham Bonnet, Elton John and Manfred Mann’s Earth Band. It was through her association with M.M.E.B. that Lange met vocalist / guitarist Chris Thompson who had sung vocals on the Earth Band’s biggest hit ‘Blinded By The Light’.

NIGHT released two albums on the US label Planet. The group’s eponymous 1979 debut album yielded two US Top 40 hits: the FM radio classic ‘Hot Summer Nights’, and the single ‘If You Remember Me’ used in the The Champ Movie Soundtrack, not present in the original release of the album, included here as bonus track.

This first album has some Westcoast waves here and there, but mostly it should be classified as FM rock, like in the bluesy ‘Ain’t That Peculiar’ or ‘You Ain’t Pretty Enough’, the ballad ‘Shocked’, and the grandiose midtempo ‘Cold Wind Across My Heart’.
Toto’s Steve Porcaro play some synths here, as well as Michael McDonald contribute piano, among other guests / session musicians. 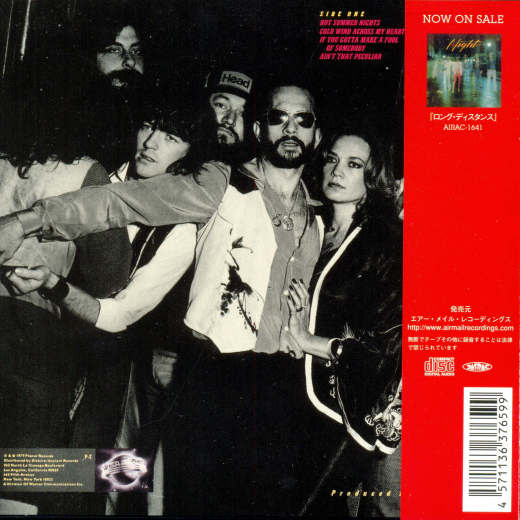 Both Night albums become very hard to find for years, and this Japanese 24 Bit Digital Remaster did justice it with a crystal clear sound.
Unfortunately, it’s sold out right now.