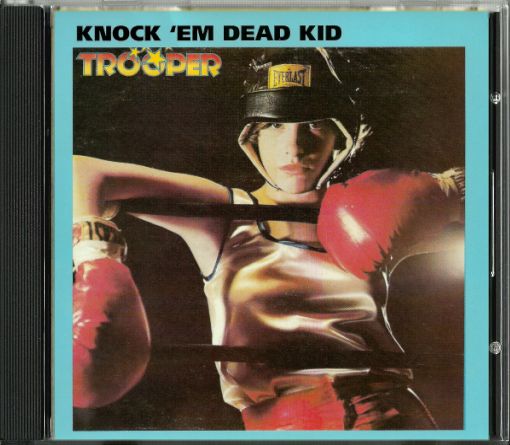 As requested by many, here’s the not easy to find only CD version of cult Canadian rockers TROOPER album “Knock ‘Em Dead Kid“. Trooper is one of Canada’s best Seventies melodic rockers. From 1975 to 1980, the Vancouver quintet produced five albums and a dozen top 20 hits. And they’re still around, despite founding members Ra McGuire and Brian Smith announced their retirement last year – giving their encouragement and blessing to remaining members to continue.
In their early era Trooper was huge in Canada selling platinum, but due to MCA inept operations the band never made it big in America. There’s still a legal dispute and Trooper early albums only have been reissued  on CD once in Canada, now out of print. This ”Knock ‘Em Dead Kid” CD is being sold for $230, go figure.

”Knock ‘Em Dead Kid”, the third of four albums produced by Guess Who / BTO founder Randy Bachman — a big influence on the band’s sound — has the usual mix of rockers (the title track), unforgettable pop classics (We’re Here For A Good Time) and ballads (Oh Pretty Lady).
Hook laden, well arranged, melodic and catchy these songs show a band at the top of its form.

Unleashed in 1977, this is perhaps Trooper’s shining moment showcasing the group’s songwriting versatility, in the butt-wiggling boogie of the title track and the road-weary ballad “Most of the Country.” Whether they’re playing classic Bic-lighter anthems like “Oh, Pretty Lady” and “We’re Here for a Good Time” or tearing through corkers like “You Look So Good,” Trooper consistently give the goods.

This record represents the peak of Trooper’s creativity, and stands well on its own as an example of good, solid late ’70s CanCon.
Highly Recommended