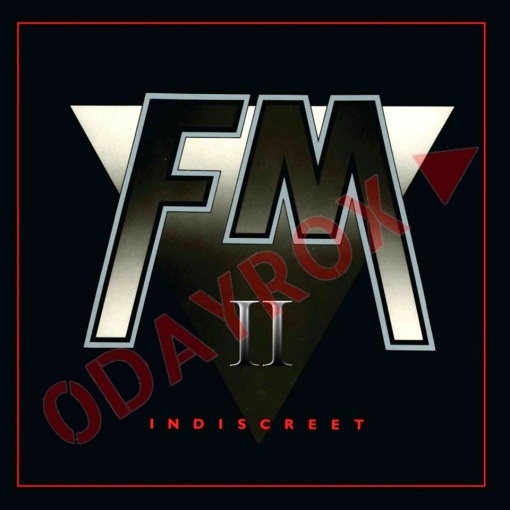 FM is a British melodic rock / AOR institution still releasing quality material after forty years with their recent CD ‘Thirteen’. The band’s debut album 1986’s ‘Indiscreet’ is regarded as one of the best AOR albums from the Eighties. Many fans miss the unadulterated AOR sound of that first effort, as FM morphed to a more melodic (hard) rock style since second album “Tough It Out”.
“Tough It Out” took the band 3 years to crystallize, simply because the record label asked for a more mainstream, American style rock music. But in between the two albums, FM wrote a lot of songs in the 1987-1988 period, and with the classy AOR mold of their debut.
What we have here is “Indiscreet II“, an awesome bunch of songs the band penned & demoed for their second album that never was… These aren’t the poor sounding demos floating the internet for years – the quality of this “Indiscreet II” is far superior, and the songs – 18 tracks never released – a treat for ’80s AOR aficionados.

After the European success of their debut album ‘Indiscreet’, Steve Overland & Co. began to work on the new songs that would make up their second LP. During the little time they had between gigs, song ideas were emerging within the band and soon they had a handful of songs.
Many of the new written songs for the new album were demoed in good quality, but their record label wanted to internationally release the band, especially in America, and a new musical concept was asked for FM: commercial, radio-ready melodic rock / rock&pop.
Then new songs were written and recorded but label still refused the too much AOR / European sound of the tunes, so most of them were shelved.

What FM created here between 1987 and 1988 is really awesome, songs in the vein of debut but even more complete in arrangements and AOR melodies, the perfect follow up material for ‘Indiscreet’.
Well, most of them were discarded (a few appeared as b-sides) and the band spent almost 3 years to find the sound for “Tough It Out”, a wonderful melodic rock album but a commercial failure: the record label make FM lost its momentum, and for 1989, it was too late to conquer the American market.

What would have happened if in 1988 they released ”Indiscreet II”? I’m sure fans would love it, and make FM bigger, at least in Europe and Japan.
This is pure AOR in the British style, plenty of smooth vocals, terrific refrains and melodic choruses.
Some of the songs on this ”Indiscreet II” were later finally recorded by the band for especial releases / bonus tracks but these are the original demos, different, with that unique 1987/1988 atmosphere.

If you ask me, ”Indiscreet II” is the best FM album ever… and remains unreleased.
The songs are even better than the first album, and while there’s superb tracks on FM’s second album “Tough It Out”, none are in the AOR style / sound like the ones found here.
A MUST