KIX is one of those bands that almost made it big back in the Eighties but never got the real breaks some of their contemporaries did, although they truly deserved. Kix’s catalogue including ‘Blow My Fuse’, ‘Hot Wire’ and particularly ‘Midnight Dynamite’ albums are great examples of prime American Hard Rock.
After almost two decades since Kix has released any new music, the Maryland based group returned with the really solid “Rock Your Face Off” some time ago, and one of you asked for a revisit of the release here on the blog.

A lot has changed since the ’80s, but it is good to see that Kix has stuck to their signature style, in your face Hard Rock sound.
Opening with “Wheels In Motion”, it’s clear the razor sharp guitar playing of Brian Forsythe dominate this album. The Alice Cooper influenced “You’re Gone” continues with the hard-hitting classic riffs where singer Steve Whiteman lay down his powerhouse vocals.
The rhythm section of bassist Mark Schenker and drummer Jimmy Chalfant is super tight and holds the group together with its ferocious beat. 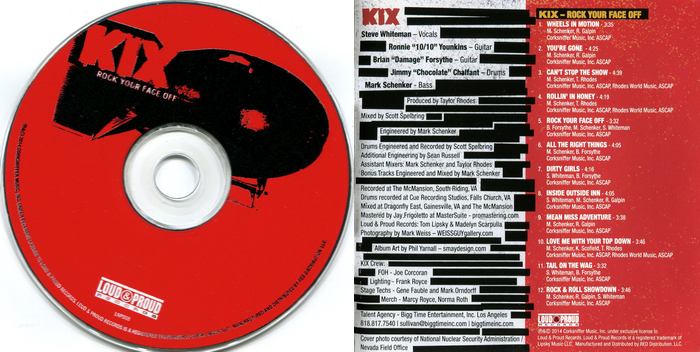 The very tongue in cheek “Rollin’ In Honey” captures the party vibe of the band, while title track “Rock Your Face Off” explodes with the high energy that Kix is noted for in concert. This song is a tribute to touring and the audiences that support the band year after year.
Kix who are also known for their bluesy touches, and this side shine on the swaggerin’ “All The Right Things”, where the guys add that huge hook that further tips the balance in their favour.
“Dirty Girls” is a sheer Scott-era AC/DC even with a Bon-like aside. On this album you really feel that Kix has done everyone proud, themselves, fans and lovers of pure and simple straight forwards rock and roll.

Of course you expect a ballad and “Inside Outside Inn” is the one that delivers well enough, if not hitting the absolute heights it’s enough to get the Zippos fired up before the sleazy groove of “Mean Miss Adventure” cuts you down in a trail of fire.

Then arrives the future Kix favorite “Love Me With Your Top Down” which sits on your face like the best dirty rock and roll, an ode to Summer and a party anthem. It’s good to see the band hasn’t lost their sense of humour over the years.

Sometimes the simplest is the best though and along with the title track and “All the Right Things” I’d add “Tail on the Wag” to my list of top picks – it’s a simple bluesy hard rock number and pure Kix!
“Rock & Roll Showdown” that closes the album is another hard driving rock number that seems to say we’ll be back and just as big next time.

Equipped with strong hooks, massive guitars and catchy choruses, Kix rocks on “Rock Your Face Off” with great style. It sounds as if the years had not passed for them, even longtime co-writer and producer Taylor Rhoades is on-board.
In the vein of ‘Blow Your Fuse’, on this new record the fun, uptempo beat of Kix never diminishes and keeps on rolling. The tightness of the band is evident.
“Rock Your Face Off” is the perfect summertime record. Crank it up to 10 and roll your top down, as the pride of Maryland shows the world how to rock East Coast style.
Highly Recommended