“Drive Into The Night” is the full length debut album from Vancouver, Canada based hard rockers TURBO VIXEN, a trio inspired by the ’80s sound & style from the genre. TURBO VIXEN consisting of guitarist Jeremy Rowlands and drummer Aaron Bell parted ways with their original lead vocalist so they’ve called STRIKER’s singer Dan Cleary to handle the lead vocals.

Losing your lead vocalist few months before recording your debut album could result into a disaster. Not the case with TURBO VIXEN, as heard here in “Drive Into The Night”. Dan Cleary – from really good band STRIKER featured here at the blog – vocals fits like a glove the material Rowlands / Bell composed.
“Drive Into The Night” is a hard n’ heavy album, with a strong, groovy, bluesy hard rock foundation.

This is a guitar-driven collection of songs. There’s a LOT of electric guitar here.
The band go for melting riffs on songs such as the metallic but melodious ‘Thunder and Lightning’, the punchy ‘Hard Love ‘n’ You’ where they sound like Y&T on steroids, or the loud ‘She’s Got the Touch’ with some KEEL on it.
However TURBO VIXEN are not afraid to add variation to their music, and that’s welcomed.

“No Mercy”, as example, is heavy, but the guys added a saxophone arrangement – which in fact sounds like another guitar – which alongside the crunchy riffs results into a refreshing mix.
Then ‘Cat House’ is a fun bloggie heavy rocker with some crazy harmonica on it, same with ‘All My Love’, a slow bluesy rocker that increases the tempo into something like a heavier version of FASTWAY. 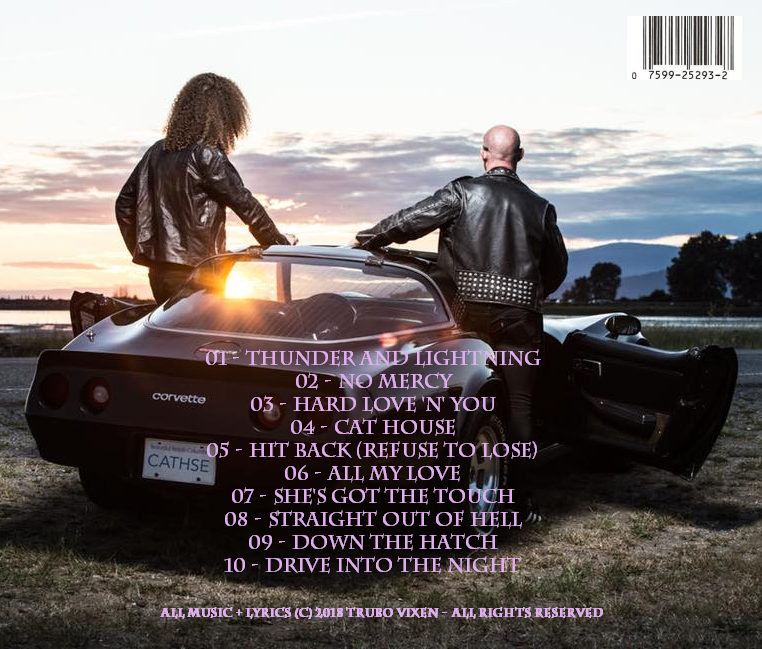 TURBO VIXEN is a quite interesting band from Canada, with their debut album indeed delivering driving classic hard rockers with a twist.
They have the looks, their logo, and everything into their music resembling the ’80s US hard ‘n heavy era, a band with the right skills and a promising future.
Strongly Recommended