“Hot Tonight” is the only official LIONHEART album released  in the ’80s, until the band returned some time ago after more than 30 years with a new CD. Their superb 1984’s debut has been Remastered & Reloaded by Rock Candy Records, and it’s a must in your collection.
A super-group of sorts founded by ex Iron Maiden Dennis Stratton, the band slowly made a name in the NWOBHM movement, but at the time of the recording of “Hot Tonight” they embraced a Melodic Rock / AOR sound & style.

Part of the legendary line-up featured on the ground-breaking Iron Maiden debut, within a year of its release guitarist Dennis Stratton found himself out in the cold.
Joining forces with one-time Liar guitarist Steve Mann (later of course to join the MSG ranks), bassist Rocky Newton (McAuley Schenker Group ) and original Tygers Of Pan Tang vocalist Jess Cox – we’ll gloss over the constantly changing drum seat for now – this new band of budding hopefuls (by then already christened Lionheart) set about writing a batch of songs that would attract the interest of promoters and labels alike.

It didn’t take too long to figure out that the rasping growl of Cox wasn’t suitable for the commercially slanted songs they were coming up with, and after auditioning a number of different singers (including Lautrec’s Reuben Archer) they eventually settled on session man Chad Brown. Possessed of a soulful, passion drenched melodic ard rock voice, Chad’s classic vibrato fitted the mood perfectly.

Thanks to Nigel Thomas (former manager of Joe Cocker and Spooky Tooth) the band scored themselves a US deal with CBS, and in the spring of ‘84 decamped to Los Angeles to record their debut album “Hot Tonight” under the guidance of producer Kevin Beamish.
A household name thanks to recent mega platinum successes with REO Speedwagon, Beamish was the perfect choice to help Lionheart mould their friendly Melodic hard rock / AOR sound, and when “Hot Tonight” duly emerged several months later they made no apologies for the distinctly American sheen it conveyed.

Indeed, despite its British origin, Lionheart’s debut is built on the songwriting and production standards of American melodic hard rock.
Boasting a surfeit of strong hooks, multi-layered harmonies and impetuous keyboards, tracks like the hugely infectious ‘Towers Of Silver’, the audacious ‘Don’t Look Back In Anger’ (resplendent with its pompous keys), the fizzing ‘Wait For The Night’, brooding ‘Nightmare’ and spirited title track ‘Hot Tonight’ all showcased a band that would surely go all the way. 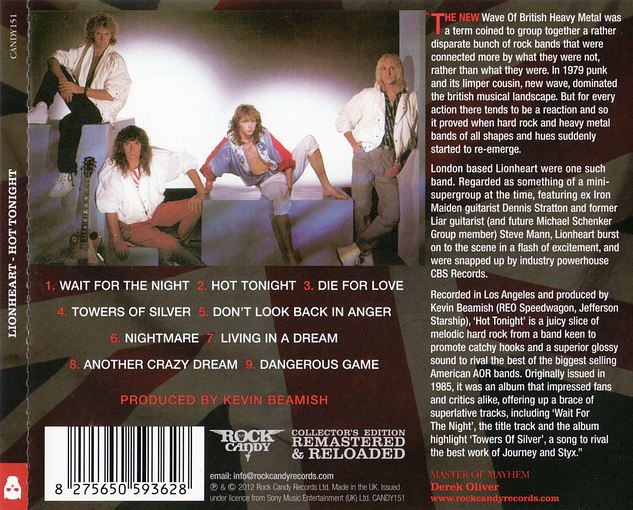 Lionheart’s “Hot Tonight” is a cult classic, for years out of print and never officially released on CD until this Rock Candy Records remaster.
Most songs on this album open on staccato keyboards (and I love this) in a pure mid-80s AOR fashion, followed by a pumping rhythm section, sharp guitars, and the melodic, clean vocals plenty of harmonies.
There’s a colorful booklet in this Rock Candy reissue including never seen photos provided by Steve Mann himself, and a complete essay about the band / recording plus previously unknown details.
HIGHLY RECOMMENDED