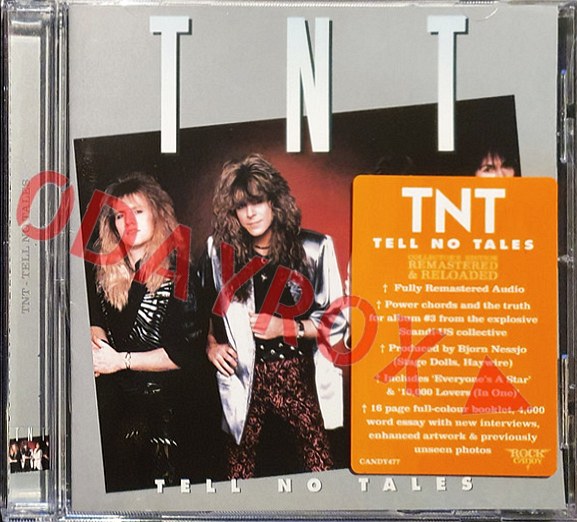 Specialists at Rock Candy Records have done their own remaster on one of the greatest AOR / melodic hard rock albums from the ’80s; the awesome “Tell No Tales” from Norwegians TNT. On ”Tell No Tales” TNT mixed like few did edgy hard rockers with melodious gems to die for.
If I could compare how TNT sounds here, it would have to be Europe’s Out Of This World era (only that “Tell No Tales” appeared earlier) mixed with all the American charm from the second half of the ’80s. It has the emotional feel of Europe, yet also has the fun side of US melodic hard / glam which go together perfectly.
This is the first time “Tell No Tales” is being officially, properly remastered – there was a good Japanese one but to grace a SHM-CD reissue – on this Rock Candy remastering the sound quality is impressive, believe me. The guitars explode in your face like never before, and everything is clearer & louder.

Scandinavia has produced many exceptional bands over the years, with Noway’s TNT being one of the most impressive. Vocalist Tony Harnell, who joined for their second album, is, in fact American and was put in touch with the band by Mike Varney of Shrapnel Records.
Singing alongside superguitarist Ronni Le Tekrø, the pair turned the group into a sparkling diamond fit for world domination. Indeed, the twin axis of Le Tekrø and Harnell is considered to be one of the greatest ever couplings of the melodic rock scene.

Recorded in Norway and New York, by producer Bjørn Nessjø to exacting standards, the record was immediately hailed by critics and fans as a masterpiece. Harnell and Le Tekrø crafted a sound that pushed at the very edges of audio wizardry.
Le Tekrø’s guitar playing was immediately hailed as the natural successor to Yngwie Malmsteen whilst Harnell’s vocal delivery was compared to Freddie Mercury, leading to comparisons with the imperial majesty of Queen. Indeed, the band left no stone unturned in their quest to push at the boundaries of what could be achieved in an era where flamboyance ruled the world.

Released in 1987, on PolyGram Records, the album contains a stellar selection of songs, including ‘Everyone’s A Star’, ‘Child’s Play’ and ‘10,000 Lovers (In One)’, a song that became a smash hit in Norway and raised their profile in the US and across the world. The album also includes a number of mesmerising bite-sized instrumental guitar compositions from Le Tekrø, and is regarded as one of the most comprehensive statements of musical intent ever crafted.
KILLERRR