LIONHEART – Unearthed; Raiders Of The Lost Archives [Japan Only] Out Of Print 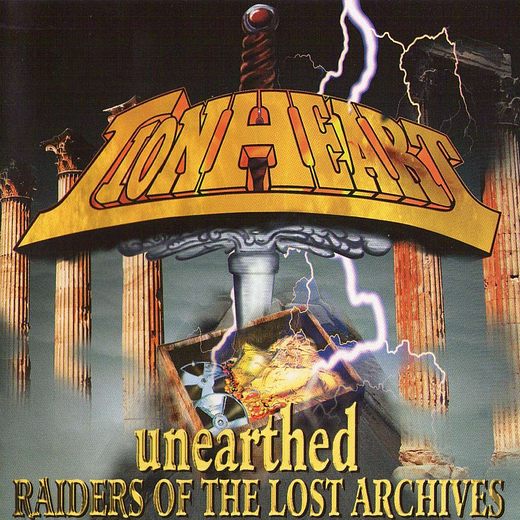 After the recent post of LIONHEART‘s great album remastered and waiting for the band’s official second effort in more than 30 years to be released soon, it’s fitting to be featured on this blog “Unearthed; Raiders Of The Lost Archives“, a terrific double CD only appeared in Japan compiling all Lionheart ’80s recordings than never made it into disc.

Since their foundation in 1980, Lionheart was the most famous unsigned band in Great Britain.
After several sold-out shows at the legendary The Marquee without a single song released, Lionheart played at The Reading Festival and were booked to support Def Leppard on their 1981 British tour.
Really impressive for a band without a recording contract.
And that’s because the quality of the musicians involved.

Dennis Stratton (Iron Maiden, Praying Mantis), Steve Mann (MSG, The Sweet, Eloy) and Rocky Newton (Wild Fire, Def Leppard, MSG) not only were excellent musicians, but together formed one of the most respected European ‘harmony vocals’ trio from the first half of the ’80s.
The trio arranged and recorded backing vocals as session musicians for almost every Rock record that came out in UK at the early ’80s, from Def Leppard to UFO, Grand Prix to Uriah Heep, and countless more.

Additionally, and while playing all over Europe, Lionheart recorded tons of demos.
The band experienced several line-up changes in the drum and keyboard slots, but the core of Stratton / Mann / Newton stay intact.
The 1983 composed songs / demos ended on what was Lionheart’s album Hot Tonight, but the previous from 1981-82, and the latter (1984-85) remained unreleased.

Over the years since originally appeared, Lionheart album ‘Hot Tonight’ became very popular in Japan, with lots of fans hungry for more. Ironically, the band never toured in Asia.
That’s when Japanese record label Pony Canyon approached Stratton / Mann / Newton for a possible new album, or some previously unreleased material.
All the tapes from the ’80s were checked and the songs on this “Unearthed; Raiders Of The Lost Archives” carefully selected by the 3 musicians, all remastered by Steve Mann himself.

What you have here are some precious gems from this incredibly talented band that shouda been huge.
On the first CD we find the songs from their early era, more hard rocking and influenced by the NWOBHM.
Of course there’s the track that names the band, ‘Lionheart’, as far I know the only officially released before as part of the ‘Heavy Metal Heroes Volume II’ LP (HMRecords, 1982).
‘Don’t You Know What Love Is?’ not only has a similar name to Foreigner’s song, but it also sounds like the American band hardest moments, while ‘Give Me The Light’ is a highlight with a midtempo pace in the vein of Grand Prix.

Then CD 2 is a must for mid-Eighties AOR suckers and fans of ‘Hot Tonight’, as most of these were composed / recorded between 1984-86, plus some tracks that never made it into the album.
As examples there’s a catchy melodic rocker in ‘Sweet Surrender’, lots of synths in ‘Don’t Make A Fool Out Of Me’ (it sounds like a lost Virginia Wolf song), an even I find a little hair metal on the fun ‘Every Dog Has His Day’. 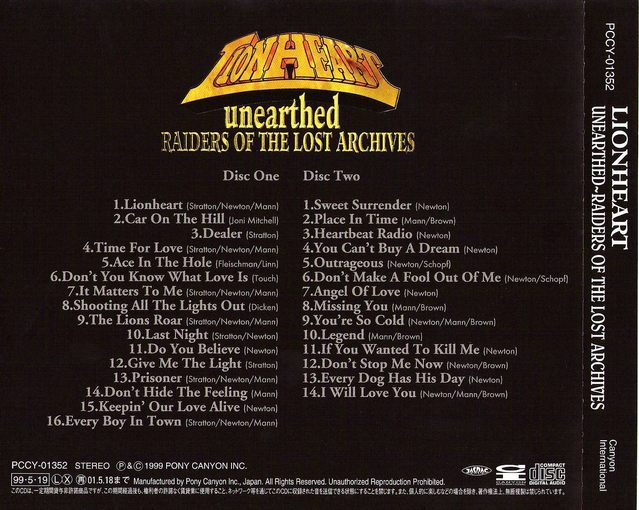 This 2-CD box packaging is excellent, with a family-tree of all band members, a colorful 24-page booklet with rare photos, lyrics and liner notes from all musicians.
Yeah, Lionheart’s “Unearthed; Raiders Of The Lost Archives” is a must have for collectors and fans of ’80s Melodic Hard Rock / AOR.
Out Of Print