Two of the most underrated – but widely respected – releases from the late ‘80s were undoubtedly the first pair of albums by New Orleans-based hard rock outfit LILLIAN AXE. Now Rock Candy Records have provided their ‘Remastered & Reloaded‘ treatment to them shaped from 24 BIT digital technology. “Love + War” was the band’s sophomore release, clearly surpassing the already great quality of the rocking debut.

Lillian Axe – which been led since their inception in 1983 by guitarist Steve Blaze – formed in New Orleans, and establishing themselves as local heroes the band went through a variety of line ups, before settling on the Lillian Axe moniker.
Spotted by RATT’s manager Marshall Berle, the band signed a recording deal with MCA and released their self-titled debut in 1988.

For Lillian Axe, the commercial under achievement of their debut album was a bitter pill to swallow. Yet it wasn’t anywhere near as disappointing as the lacklustre performance of their second album “Love + War”, a record that has gone on to be regarded by many as one of the most accomplished and best loved records from the late ’80s.
Somehow they managed to achieve creative heaven with this release, a record that demonstrated an ability to write and perform courageous songs, elevating their reputation above the expectations normally associated with the sort of generic hard rock they had been lumped in with. 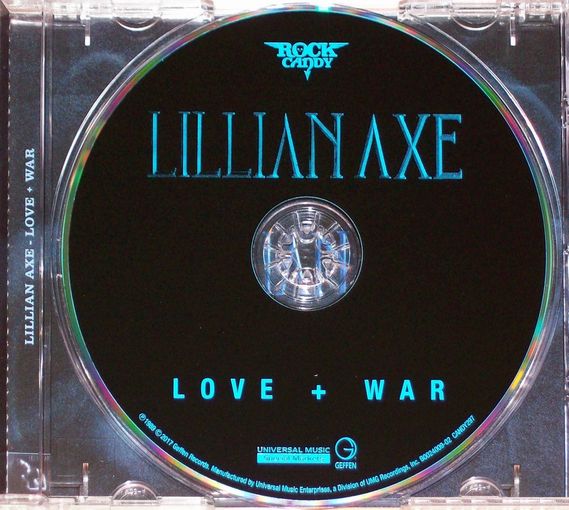 “Love + War” showcases a much more mature songwriting, a decidedly edgy material, one keen to explore and experiment with arrangements and performances that are light years ahead of the competition.
In addition, the production, courtesy of British engineer Tony Platt (Def Leppard, AC/DC, Krokus) presented the band and their songs in a wide screen style, accentuating every twist and turn with pin-point accuracy.

The end result was a superbly melodic, radio friendly, hard rock record.
With cuts like “All’s Fair In Love and War,” “She Likes It On Top,” “Ghost of Winter,” the lead off single (and video) “Show A Little Love,” and the Girl cover of “My Number” featuring dialogue by Prince protege Vanity, “Love + War” provided Lillian Axe their fair share of airplay on the syndicated Z-Rock. Unfortunately, not many people outside the glam rock circles heard it.
The fact that the album tanked is solely the responsibility of MCA Records who did nothing (once again) to boost a Lillian Axe record.

As said, this second Lillian Axe effort is a superb ’80s hard rock album with that kind of huge production impossible to recreate today. This Rock Candy Records remaster of “Love + War” is great, as it comes out punchy and dynamic avoiding brickwalling.
It’s a true crying shame that “Love + War” wasn’t properly promoted back in the day (and I know many of you never heard a single musical bit of it) as this is truly one of the most sensational records of the era, a buried treasure waiting to be rediscovered.
HIGHLY Recommended

You’ve seen it first at 0dayrox