Taste was born on the day before New Year’s Eve 2009, when the two brothers, Christoffer and Felix Borg decided to make music together. The vision was to make classic 80s AOR, greatly inspired by FM, Giant and Strangeways.
And this mix is even more present on “Moral Decay”, a fabulous collection of melodious tunes and catchy choruses.

When brothers Felix and Christoffer Borg released their debut album 2013 via AOR Heaven, it was much different from 2018. that was a lovely collection of classy AOR tunes but a home production where most of the instruments had been programmed.
Today, the record company is the same but the brothers experience is million times better both when it comes to production as well as musical skills. While they already there had a clear vision of the timeless AOR thay want to put on record, now, after several years, everything is more focused for Taste.

In “Moral Decay” the listener will discover that the songs hold a completely different class and the summary on the songs can be written between good and very good, close to superb.
“Moral Decay” is an album of 13 songs (including two instrumentals, intro and outro) that still gives the vibes, I dare too say, classic AOR between ’84 and ’86. ‘On the Run’ sounds like directly taken from Miami Vice. The song has got retro sounding keyboards and those “dinky toys” drums so en vogue today in the Synthwave genre. Love it.

First proper song ‘Alive’ takes naturally on after the intro, an uptempo guitar riff that keep us back in 1985 especially as the keyboards gets beautifully played as a soloing backing instrument.
It gets followed by one of my favorites on the album: ‘Dangerous’ a song that has got a guitar intro that really catch the ear at once and gets on with a bass riff that gets reinforced with guitar. Vocally, Christoffer has developed incredibly and has got a completely different strength and security in his voice today, which can definitely be heard on ‘On My Shoulder’. 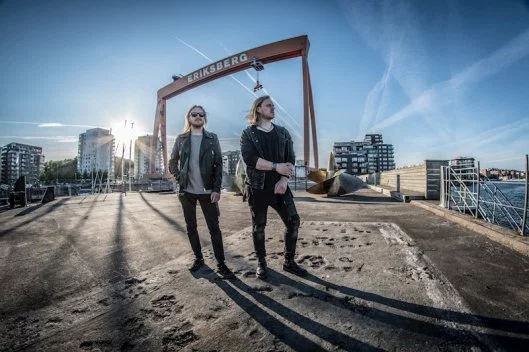 But when it comes to certain things that stand out, it’s obviously his amazing way of handling the guitar. Christoffer is influenced by the likes of ’80s John Norum, Kee Marcello and TNT’s Ronni LeTekro. Listen to songs like terrific midtempo ‘The Fire Inside’, the pumping and as well keyboard driven ‘Adventureland’, and especially ‘My Worst Enemy’ and you will get the best of Christoffer on guitar.
There’s the anthemic AOR of ‘We Are Back’ (a winner), and the commercial yet elaborated title track. that reminds me of early Vega.

TASTE brings back the classy ‘Scandinavian AOR / Melodic Rock’ feeling of the mid-Eighties, plenty of keyboard layers, synths, clear vocals, catchy choruses, strong guitar work and solid songwriting / production.
Do you need more? They don’t make albums like this anymore…
A MUST for AOR suckers.