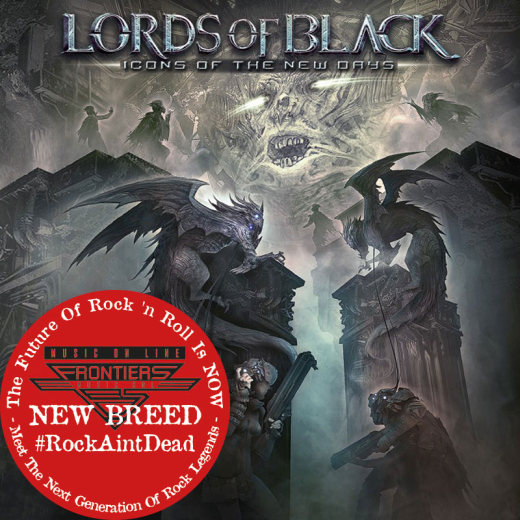 Since formed only four years ago, signed by Frontiers Music LORDS OF BLACK has delivered two strong albums, and now got ready their third titled “Icons Of The New Days“, which will be available as well in a 2 CD Digipak Deluxe Edition.

The bonus CD includes Lords Of Black’s takes on famous songs by Queen, Journey, Anthrax and Bruce Dickinson on a special bonus disc which also includes two previously unreleased original songs: “The Maker and the Storm” and “When Nothing was Wrong”.

On the Queen track “Innuendo”, Romero shows us that he can not only fill the shoes of the legendary Rainbow vocalists that preceded him in the band, he can also take on Freddie Mercury and get away with it. He is not copying Mercury, but he adds is own personality to his take on the classic Queen song.
The cover of Bruce Dickinson’s “Tears of the Dragon” is perhaps the best cover song on this release. A beautiful power ballad-type of song delivered flawlessly. The Anthrax track “Only” is cool as well and proves once again that Lords Of Black can play all kinds of music.

As extra, you have Lords Of Black’s version of Rainbow Dio-era classic “Lady Of The Lake” (Japanese bonus track of the band’s second album) where you can hear why Blackmore called Ronnie Romero for current Rainbow’s vocal slot.