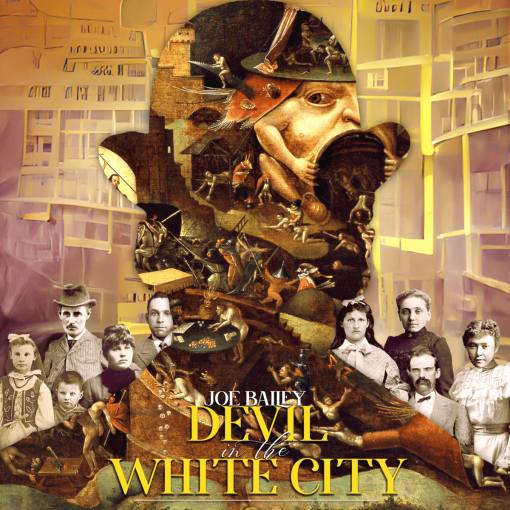 Although having written and recorded a fair number of songs and albums over the years, British musician JOE BAILEY first official release didn’t land until 2015 in the shape of the concept album ‘The End Comes Too Late’. The following year, ‘Like Night and Day’was released, however his 2017 effort “Nightingale” gained more publicity and airplay on progressive rock radio stations.
Now this youg musician who manages everything about his his work – from performing all instruments and doing lead vocals to production and distribution – is releasing his new effort titled “Devil In The White City“. Musically a mix of Neo-prog with rock&pop and some hard, BAILEY’s style isn’t easy to classify or put into a single slot, and there’s reside the charm of his music always delivering intriguing twists.

The opening choir/synth string passages of the short instrumental title track provide a fascinating contrast to the full-throttled onslaught of the second song, “Origin.” Bailey handles all the instrumentation, propelling the song with aggressively picked bass and probing double drumming. Additionally, his multi-tracked and aggressive guitar playing compliments Bailey’s powerful vocals used to deliver his dark lyrics with authority.
“The Fruitful Dead,” with its driving piano passages and programmed percussion, slows things just a bit yet provides some of Joe Bailey’s best fretwork on the album. Musically pensive yet rhythmically driving, Bailey builds on the piano and guitar passages with a focused intent while underpenning his cryptic lyrics:

“Doctor Death” by no means lightens the mood. The piano synth intro takes a page from prog songs of the ’80s. The choir-like backing vocals offer a great contrast with the modern drum backing. Bailey throws in tricky time signature changes and keyboard touches, which effectively enhances the bleak lyrical contents.
There clearly is a lot musically and lyrically happening, but it all melds together.

“Holmes Sweet Holmes” continues the compelling album dynamics with a Richard Wright-like piano intro and analog synth parts, before the full band effect kicks in. It’s at this point that I needed to remind myself that Joe Bailey played every instrument, as the playing and arranging are top-notch.
The dynamic time signature changes in “Holmes Sweet Holmes” only serve to build the tension. Lyrically, Bailey is more direct in sharing his urgency and pain, which is reinforced by the challenging guitar and keyboard passages. This song begs for repeated listening to unpack all the musical nuggets.

“Disappearing Today” invokes equally powerful visions with its lyrics (“gone are my guests, filed away, lost in the throes of time; brush all my debts and flames of the day, away with the tears of my crimes”) and epic instrumentation and arrangement. The finger-picked acoustic guitar and synth strings establish the setting. Bailey delivers his most urgent vocal, which is enhanced by choppy lead guitar and driving tom-tom work. Again, Joe Bailey pulls together powerful prog elements to create his vision. What results is an epic that conveys the frenzied decay mentioned in the song’s coda.

”Devil in the White City” concludes with “The Begging of the End.” Acoustic piano provides a pensive beginning to a track that builds on Bailey’s direct bass playing. The lyrics become darker, and the guitars more gnarly as Bailey builds suspense. Musically, the song is totally in keeping with the rest of the album, meeting the high standards of musicianship previously established.

”Devil in the White City” is a strong piece of work from one single man, but the varied ideas throughout makes you think os a full band of virtuosos. This is a compelling and finely crafted progressive rock album with melody and busy instrumentation, at places easy listening at other complex, demanding your attention.
Highly Recommended